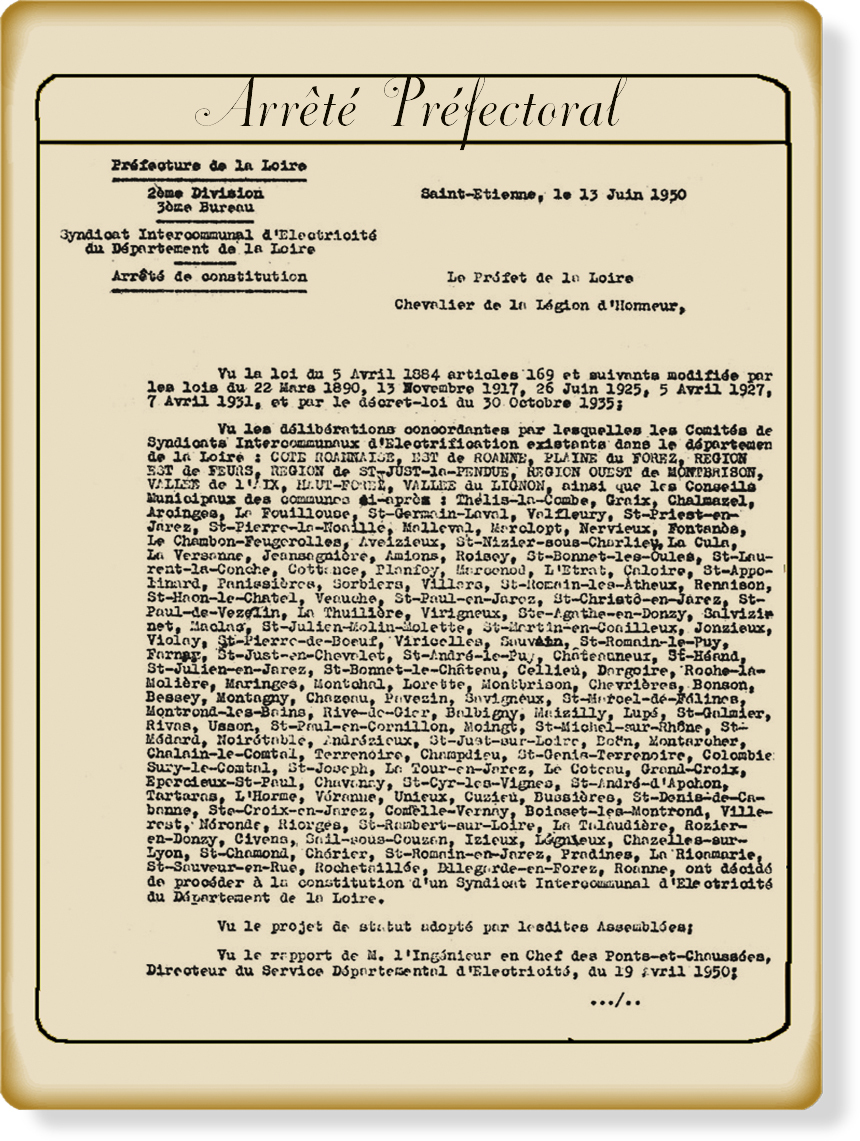 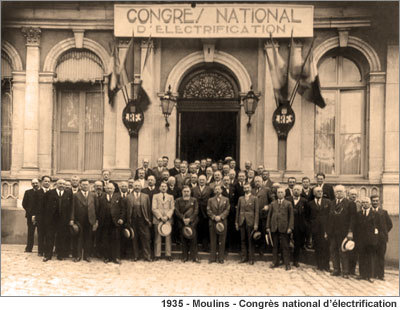 SERVING THE PEOPLE OF LOIRE SINCE 1950

UNDER THE RESPONSIBILITY OF THE MUNICIPALITIES

Responsibility for the organisation of the public energy distribution service lies with municipalities under the laws of 5 April 1884, 22 March 1890 and 15 June 1906.

To deal with the different production and distribution companies, guided mainly by the need to get the best possible return on their investments, municipalities would soon start to group together, forming the first inter-municipal electrification syndicates.

By creating these specialised structures, they acquired the competences and resources they need to serve the whole of their territory, whereas only industrialised, densely populated areas or those close to the production sites were of interest to the companies.

From the 1930s onwards, the inter-municipal syndicates started to group together into Departmental syndicates.

The law that nationalised electricity and gas on 8 April 1946 replaced the old concession holders with the national electricity company. Before this date there were 600 gas companies and 1300 electricity production, transport and distribution companies.

SIEL-Territoire d’énergie Loire (the inter-municipal electricity syndicate for the Loire Department) was created by Prefectural Order on 13 June 1950.

Under its articles of association, it is responsible for the organisation of the public energy distribution service (electricity and, since 1995, gas) in the territory covered by the concession.

Over the years, the elected representatives have gradually given SIEL-Territoire d’énergie Loire new roles in order to meet the Loire local authorities’ needs in terms of utilities, energy saving, street lighting and renewable energies.

In June 2006, in line with Ministry of the Interior circulars aimed at implementing a more coherent and effective policy on inter-municipal bodies, SIEL-Territoire d’énergie Loire completely overhauled its articles of association.

In December 2009, SIEL-Territoire d’énergie Loire completed the “Departmentalisation” process when the city of Saint-Étienne joined its ranks.

In 2017, the syndicate added “Territoire d’énergie” to its name. This was a national “brand” developed by the FNCCR for use by all the country’s energy syndicates.

In 2019, the articles of association were brought up to date once again, to take account of its new activities, digital infrastructure development in particular.